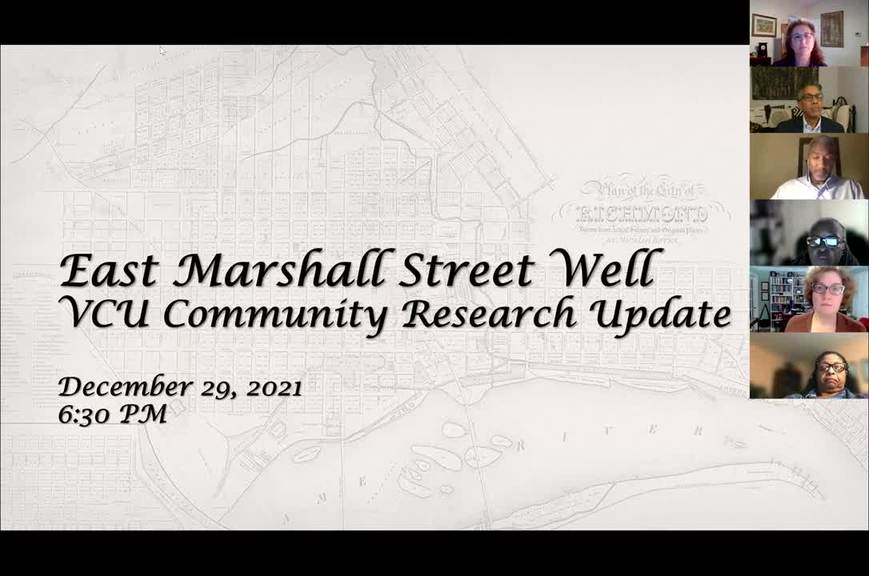 The Ancestral Remains, uncovered 27 years ago during construction of the Hermes A. Kontos Medical Sciences Building, are believed to be largely of African descent. The remains were sent to the Smithsonian Institution for further study and are now housed at the Virginia Department of Historic Resources while the Family Representative Council works on recommendations for a more permanent memorial.

Interested community members are invited to view a livestream of the event.

Members of the media are invited to cover the unveiling and related program. Please be aware of the requirement to wear a mask when you are indoors on the VCU Campus. Limited media parking is available on a first-come, first-served basis on the right side of 12th Street between Broad and Marshall streets next to the Hunton Student Center.

The panel unveiling is part of the VCU Office of Health Equity’s History and Health Program, which launched in March of 2021 with the initial series focusing on Racial Equity. The multi-part virtual series began a journey of racial healing through virtual events that examine and challenge our understanding of VCU's role in the history of Richmond and our nation. The series recordings and modules are free and available for viewing.

On Monday, Nov. 25, Virginia Commonwealth University hosted a ceremony to acknowledge and welcome the ancestral remains discovered in the East Marshall Street Well. The ceremony marked a milestone in the work of the East Marshall Street Well Project as the ancestral remains returned to Richmond from the Smithsonian Institution, where they had been located since their discovery in 1994. For more on the return, please read A Journey Home by VCU News at https://vcu.exposure.co/a-journey-home.

In April 1994, human bones and artifacts from the 19th century were discovered in an abandoned well uncovered during construction on Virginia Commonwealth University’s MCV Campus. The well’s contents are believed to have been discarded in the 1800s by medical staff.

These humans, mainly of African descent, were not shown the respect they were due, neither in life nor in death. The university is committed to moving forward in a manner reflecting the dignity that should be accorded these individuals and has created the East Marshall Street Well Project to facilitate a process with the community that ensures the remains receive appropriate study, memorialization and reburial.

Learn more about the project