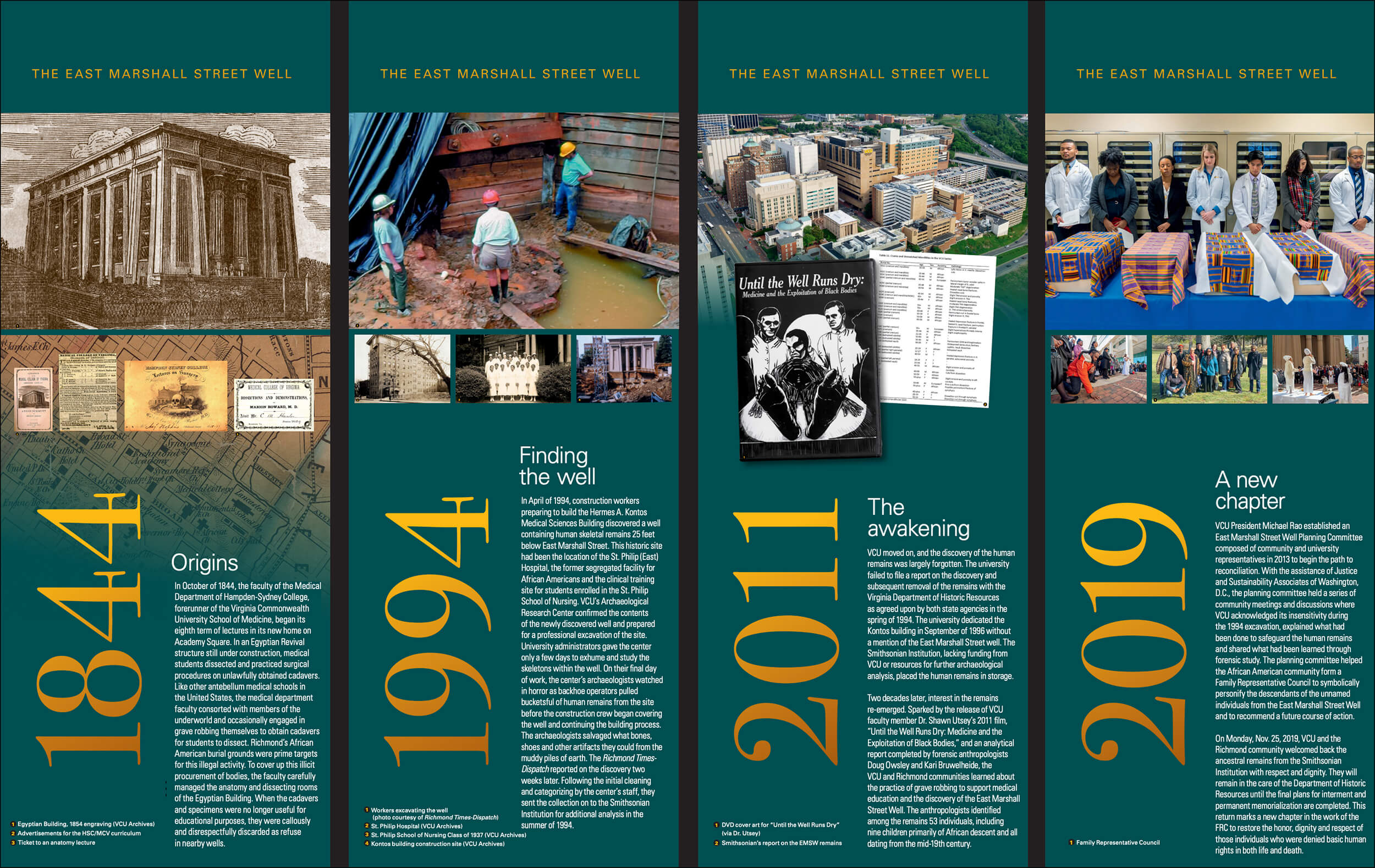 Learn about the history of the East Marshall Street Well Project in our EMSW Kontos Building Brochure.

In October of 1844, the faculty of the Medical Department of Hampden-Sydney College, forerunner of the Virginia Commonwealth University School of Medicine, began its eighth term of lectures in its new home on Academy Square. In an Egyptian Revival structure still under construction, medical students dissected and practiced surgical procedures on unlawfully obtained cadavers. Like other antebellum medical schools in the United States, the medical department faculty consorted with members of the underworld and occasionally engaged in grave robbing themselves to obtain cadavers for students to dissect. Richmond’s African American burial grounds were prime targets for this illegal activity. To cover up this illicit procurement of bodies, the faculty carefully managed the anatomy and dissecting rooms of the Egyptian Building. When the cadavers and specimens were no longer useful for educational purposes, they were callously and disrespectfully discarded as refuse in nearby wells.

In April of 1994, construction workers preparing to build the Hermes A. Kontos Medical Sciences Building discovered a well containing human skeletal remains 25 feet below East Marshall Street. This historic site had been the location of the St. Philip (East) Hospital, the former segregated facility for African Americans and the clinical training site for students enrolled in the St. Philip School of Nursing. VCU’s Archaeological Research Center confirmed the contents of the newly discovered well and prepared for a professional excavation of the site. University administrators gave the center only a few days to exhume and study the skeletons within the well. On their final day of work, the center’s archaeologists watched in horror as backhoe operators pulled bucketsful of human remains from the site before the construction crew began covering the well and continuing the building process. The archaeologists salvaged what bones, shoes and other artifacts they could from the muddy piles of earth. The Richmond TimesDispatch reported on the discovery two weeks later. Following the initial cleaning and categorizing by the center’s staff, they sent the collection on to the Smithsonian Institution for additional analysis in the summer of 1994.

VCU moved on, and the discovery of the human remains was largely forgotten. The university failed to file a report on the discovery and subsequent removal of the remains with the Virginia Department of Historic Resources as agreed upon by both state agencies in the spring of 1994. The university dedicated the Kontos building in September of 1996 without a mention of the East Marshall Street well. The Smithsonian Institution, lacking funding from VCU or resources for further archaeological analysis, placed the human remains in storage.

Two decades later, interest in the remains re-emerged. Sparked by the release of VCU faculty member Dr. Shawn Utsey’s 2011 film, “Until the Well Runs Dry: Medicine and the Exploitation of Black Bodies,” and an analytical report completed by forensic anthropologists Doug Owsley and Kari Bruwelheide, the VCU and Richmond communities learned about the practice of grave robbing to support medical education and the discovery of the East Marshall Street Well. The anthropologists identified among the remains 53 individuals, including nine children primarily of African descent and all dating from the mid-19th century.

VCU President Michael Rao established an East Marshall Street Well Planning Committee composed of community and university representatives in 2013 to begin the path to reconciliation. With the assistance of Justice and Sustainability Associates of Washington, D.C., the planning committee held a series of community meetings and discussions where VCU acknowledged its insensitivity during the 1994 excavation, explained what had been done to safeguard the human remains and shared what had been learned through forensic study. The planning committee helped the African American community form a Family Representative Council to symbolically personify the descendants of the unnamed individuals from the East Marshall Street Well and to recommend a future course of action.

On Monday, Nov. 25, 2019, VCU and the Richmond community welcomed back the ancestral remains from the Smithsonian Institution with respect and dignity. They will remain in the care of the Department of Historic Resources until the final plans for interment and permanent memorialization are completed. This return marks a new chapter in the work of the FRC to restore the honor, dignity and respect of those individuals who were denied basic human rights in both life and death.